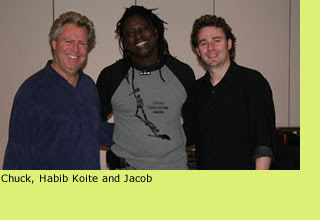 World Music superstar, Habib Koite, from Mali, spent a week recording at Charles Eller Studios. His latest CD, his first in almost 7 years, is slated for release on Jacob's Cumbancha Record label later this year. Habib is not only known for his original songwriting, vocal style, and superb guitar work, but also for his collaborations with pop musicians such as Bonnie Raitt and Jackson Browne. A gifted and soulful person, it was a treat having him with us in the studio!
Posted by Charles Eller Studios Home Page at 9:16 PM

I just wanted to add a comment to mention thanks for your post. This post is really interesting and quite helpful for us. Keep sharing.
Hi-tech music recording studio in NYC - Redcupstudiosnyc.com